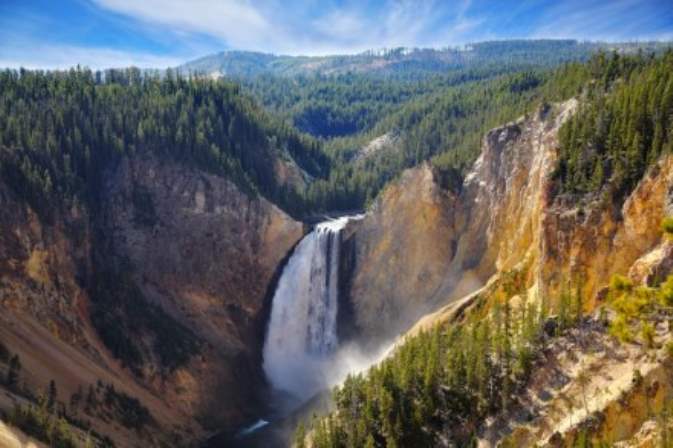 They help in preserving the environment, protecting wild animals and also offer people with a means to be in proximity with nature. They also help in ensuring that certain endangered animals, such as the one-horned rhinoceros, are protected from poachers and are able to sustain themselves.

Over the last few years, national parks have become very popular as holiday destination for tourists. Here are the top 5 national parks in the world:

It is certainly one of the most visited national parks in the world. Rich in flora and fauna, the park is home to more than 1700 different species of trees, 60 + species mammals which include bison, pronghorn, elk, gray wolf, coyote, threatened lynx, grizzly bears, bighorn sheep, white-tailed deer, mountain lion etc. The park is open all the year round and visitors from places around the world, including domestic visitors, travel to the park to enjoy its natural beauty and bio-diversity. Yellowstone is also popular as a destination for adventure activities such as hiking, boating, camping etc.

A UNESCO World Heritage Site, Tikal was once the capital of the most power Mayan kingdoms. The ancient ruins are surrounded by bio-diverse forests, which are home to exotic plants and animals. The pyramid shaped Tikal temple is the main attraction of the park. The park also has other Mayan temples, monuments and palaces such as the Great Plaza Ballcourt, Bat Palace, and Lost World Pyramid etc. which are worth exploring. Tourists also like exploring the burial sites where many of the ancient Mayan kings and queens were buried. It is a great place to enjoy the grandeur of the ancient Mayans.

A list about national parks cannot be complete without mentioning a national park of South Africa, the country which is famous for being home to some of the most exotic animals on the planet. Wildlife enthusiasts enjoy the experience of watching animals such as lions, zebra, giraffe, buffalo, leopards and elephants in their natural habitat. There are more than 20 different camps in the park where the guests are offered with decent accommodation along with food. Wild jeep safaris are also organized from these camps. Kruger National Park is spread in an area of over 7000 square miles.

It is undoubtedly the most bio-diverse national park in the world, situated in the Galapagos Islands, in Ecuador. The park is famous for being the place that inspired Charles Darwin to come up with his theory of evolution. After returning from the park, he wrote his famous book, ‘On the Origin of Species’. Accommodation is available inside the park itself. Some of the exotic animals that people can see in the park include the Galapagos penguin, blue-footed bobby, marine iguana etc.

Situated in the state of Himachal Pradesh, it is one of the few national parks situated in the Himalayan region. It is home to more than 31 species of mammals, 9 amphibians, 181 birds, 17 mollusks etc. The park is also popular as a destination for adventure activities such as rock climbing, forest exploration etc. Himalayan National Park is also home to many fountains, trees etc. which add to the cynic beauty of the park.